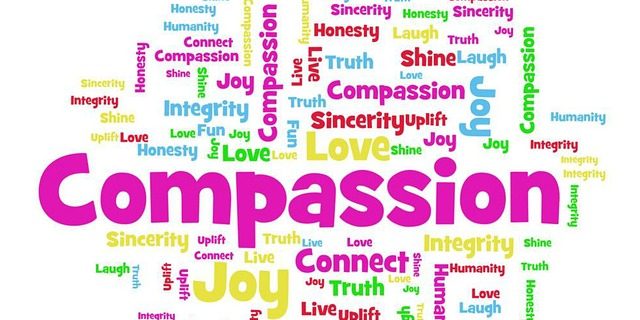 Hello lovely people. I hope you are well on this beautiful day. Firstly, I send you lots of love and blessings because all us souls are trying to find our way while some are going through some nightmares which are so dark that it is so hard to see better days. So, I send compassion, love, blessing, and all good wishes for wherever you are at in your life right now. I know because I remember such days so clearly that when I thank the universe for getting me to this point, I even cry. I just can’t believe it that I made it through a time when I thought the whole world was against me.

I was going to write about shame or that topic I’m still not ready to write about; self-sabotage but I landed on compassion because something opened my eyes to such a degree that I didn’t even think it was possible. Now I can judge less. Here we go, hold onto your cup of coffee or tea. Breath in and relax because you are with T. Dench Patel now. There’s nothing to hold onto to, let yourself go and set what comes to you free.

Can you remember how you were when you were growing up? Would you not agree that your surroundings and influences made you either cold or compassionate? I was born in South Africa, and I was born not far from a dangerous part of Johannesburg. Compassion was hidden, so was vulnerability. It was easy to become a stone the more people threw stones at someone, your life, personality, family, religion, culture, education, gender etc. while living in South Africa, and even out there in the real world as a traveller.

My compassion increased the more I was away from violence and unjust situations yet funny enough it also grew from injustice and pain. I don’t regret living the experiences I’ve lived in South Africa because I believe that is where my compassion was born and grew pretty strong during my teens. If you’ve been following my posts on the news page or social media, you might have seen a quote I’ve written: “We often give the world the most of what was either taken from us or never given to us…”

If it hadn’t been for my lessons on compassion, I don’t think I would have become a writer, written books, blog posts, charity work and a lot more. My compassion now has grown to a greater level after watching this video. Please watch the link at the end of this article. Nine million views so far and this man, ironically called Daniel Amen, poses some very interesting things. He shares with us the most important lesson learnt from 22 years in the profession and 83 000 brain scans from 93 countries. The part that amazed me the most is how Daniel mentions that researchers were complaining that clinical psychiatrists should not be allowed to take brain scans. I had an aha moment when he says, “Did you know that psychiatrists are virtually the only medical specialists that virtually never look at the organ they treat? Think about it cardiologists look, neurologists look, orthopaedic doctors look and virtually every other medical specialities look, psychiatrists guess…” Then he goes to say, “Before imaging, I always felt like I was throwing darts at my patients and had hurt some of them which horrified me.”

“Behaviour is an expression of the problem but not the problem.” Today, Daniel Amen and his team have scanned over 500 convicted felons including 90 murderers… “and what surprised us is that many of these brains could be rehabilitated.”

I had no idea what a spec scan was until the last few days and how it helps to detect dementia, ADHD, depression, traumatic brain injury, anxiety, panic attacks, suicidal thoughts, the effects of drug and alcohol abuse etc. I was surprised that today, we have revolutionising treatments where people can have a look at their brain before someone turns out to be a mass murderer.

It made me wonder that we have no idea what kind of trauma people have been through in their life and what is affecting them. We take depression, anxiety, panic attacks so lightly and have no idea what the person who is dealing with it has endured in the past to have it manifest the way it did.

More reasons why I wanted to write about compassion. After seeing the way life is in South Africa. It makes me wonder a lot about South Africa; the twenty-three suicides a day, with 460 attempts in one day, violence, crime, unemployment and lastly South Africa is the number one rape capital in the world. Looking at the statistics in domestic violence and the effects apartheid had on this country, it’s good to know that you can make your brain better on a brain smart programme. What do I mean by this? See the images of the scans on the link below and how they look for different individuals with depression or ADHD, for example.

I sat there wondering after watching this video about the society in South Africa, United States of America, Colombia, Mexico and other countries, I wondered about how the lack of education, love and money in households leave people vulnerable to all sorts of states.  We don’t know why people are acting out. It’s not a common practice to take a look at someone’s brain when a person has suicidal thoughts, depression, anxiety etc. Also, the lack of education and no money plays a huge role for people to afford treatment.

Let me know how you viewed the topic of compassion through this video. I could have written about the medical aspect and psychiatry, but for me, compassion stood out from watching this video.