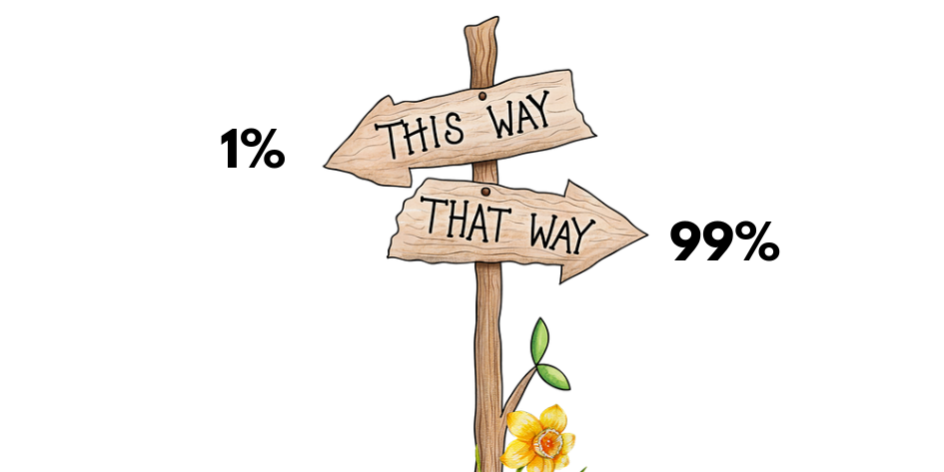 If you’re reading this article, had an extraordinary and intense life, feel like no one else has lived something so radical like you then you are wrong. Some people experience radical things in life and don’t have quite the radical experience you had with certain things in your life but be sure that their “radical gift” was related to the gift they are best suited to give in this world just like you.

Now stop living with the story, keep it if you want but find what you have to do with the diamond gift; your life and every ounce of experience you have from it. Give it away, charge for it, teach it, but don’t keep it to consume you and don’t let it waste away. To do that, you need to do the work on you first and that is, to let go and surrender.

What are the one percent in the world who are living their dreams and impacting the world doing right now?

They have a routine and begin the hardest work. That’s not the work that ninety-nine percent think they’re doing right by the way.

Ninety-nine percent of people think that you got to work hard to keep your family together, to have enough money to send your kids to school, to live comfortably, to follow the nine to five grind to…

Ninety-nine percent of people are doing what who knows said you have to do in this life to have a dream, not to follow your dream, to work hard, that life is hard, get out of your head and get with the real world, that you have to do this and that…

If things were so easy, every man, woman, child would be rich and have everything. Isn’t that boring? Let me tell you something, something a lot of people overlook. I’m going to tell you a little story…

Once upon a time…

Once upon a time, there was a poor man named Ian, who had two kids and a wife. Before he had kids and married his wife, he struggled. Ian regrets one thing all the time so he can’t see the gifts that God/Universe is leaving a clue to just like the day he regretted not following his intuition and listened to the greedy man who now has it all.

Ian worked in a gold mine and often passed a well when he went to and from work. He walked past the well for twenty years while mining for gold for a rich man and only got paid to get the basics which lasted a day. Every day was the same, and he and his wife prayed for or visualised a better life.

One day he passed the well, like every other day and his intuition has been telling him for months that if he jumps in the well, he’ll find gold underneath the water. He ignores his intuition and continues his routine.

One day a man who Ian works with for years at the mines return home with him. As they pass the well, Ian says I think there’s gold in this well. The man who was accompanying Ian said, “Seriously, what makes you think that?” Ian says, “I don’t know I just think so.”

They stop at the well and since they’ve got their gear with them the man tells Ian, “Why don’t you jump in the well and find out. I will help you get down with the rope and get back up after you check it out.” “Okay, let’s do it,” says Ian.

He gets down and finds that the water is not so deep. With the gleaming light shining on the water, he isn’t sure if what he sees in the water is the light or little white sparkles shining underwater. He reaches out to grab one of them, and to his surprise, it’s not gold; instead, it’s diamonds. He grabs the rock which is covered with sand and stone and tells the man to pull him up. As soon as he gets over the wall, he says to the guy with excitement, “See, see what I found. Isn’t it huge?” The man looks serious and shocked. He didn’t think there was anything in the well. He just wanted to see Ian jump at his words.

To his surprise, he sees the diamond. While Ian screams, “Yes, we’re rich. Let’s go home and show my wife. We both don’t have to work in the gold mine again.” The man is so happy but also thoughtful at the same time. Ian and the man go to Ian’s house, they cook up a grand meal, and Ian’s wife is so pleased. They take out the best of the best that they’ve been saving. The man laughs and drinks with them and then Ian and he make a plan to leave their jobs tomorrow and go and dig out the diamonds.

The man leaves while Ian looks at the one shiny stone and dreams his life away with his wife.

The next day Ian is super excited. He takes everything he and the man talked about with him yesterday in their plan. He makes his way to the well; the same time he passes the well every day. As he comes closer to the well, he sees people already digging there. It seems they’ve been digging all night. He’s worried when he sees the man who was with him just a couple hours ago being his best friend.

As Ian approaches the man, the man screams, “There’s the guy with all his gear ready to steal my diamonds.” Everyone looks at Ian with hate and Ian knows this is a losing battle as there are even professional men with suits standing there with documents.

Ian walks past them as he usually does when he passes the well. He pretends he didn’t hear anything and heads straight to work very disheartened by the betrayal. “Never mind, the diamond I have will give us a better house and just enough to send the two kids to a good school,” says Ian.

Since that day, Ian stopped dreaming, stopped believing and lost hope in humanity. He got a better job, a car and a house and has to pass the mine where once was well. The well is too far from his dreams now. There are big buildings surrounding it now and it’s become a mine. He doesn’t make friends at work and comes straight home. Ian is feeding his regrets and thinks this is the life of many and that there’s no point in trying for a better life than the one he’s carved out for him and his family.

When you think you deserve gold the universe/god is saying, “No, you deserve more… Please follow the signs. Why are you jumping into a well at a man’s command and why are you not jumping into the well when you’re given the intuition. All you have to do is follow it?” – T. Dench Patel, 27 June 2019, 20:36